MFM are proud to support Loop Media to announce L.A.B will be playing a special show at the iconic TSB Bowl Of Brooklands in New Plymouth this summer. Fresh off selling out Auckland’s Spark Arena, the day will see L.A.B performing alongside The Black Seeds, Mako Road, Bailey Wiley & Anna Coddington, with a lineup that will not be seen anywhere else this summer.

This show will take place on Saturday January 9 in New Plymouth, serving as one of L.A.B’s only headline shows over summer. Tickets on sale from Ticketek from Tuesday July 14, with discounted children’s tickets available.

Bringing their renowned live sound to the Bowl, L.A.B. was founded by the legendary Kora brothers Brad Kora (drums) and Stu Kora (guitar, keys) alongside Joel Shadbolt on lead vocals & guitar, Ara Adams-Tamatea from the mighty Katchafire on bass & Miharo Gregory on keys. In three short years, the band have become the highlight on the live scene, selling out tours across NZ and Australia on the back of the release of three albums.

2020 has seen L.A.B sell out NZ’s first arena shows since lockdown at Spark Arena & Claudelands Arena, all while beginning work on their fourth album. Set to be released in late-2020, the album will follow the release of the gold-selling L.A.B III, an album which featured the number one smash-hit ‘In The Air’.

Joining L.A.B for this show is an exciting range of some of NZ’s finest talents, including Wellington-legends The Black Seeds, playing tracks from their impressive back catalogue of summer anthems of reggae, funk and soul-infused goodness.

Mako Road will be joining the bill, and are an act who have established themselves as one of NZ’s brightest up-and-coming talents. Their laid-back indie-rock sounds has seen them amass over 20 million streams, and following on from sold-out tours across NZ and Australia, will be bringing their psych/pop-infused sound to Taranaki.

Taranaki-local Bailey Wiley is set to return home to perform tracks from her growing back catalogue, including her most-recent self-titled EP from 2019. The acclaimed vocalist will bring her soulful sound to the Bowl, performing alongside a full band. Acclaimed singer-songwriter Anna Coddington completes the line-up, who is set to release a new collection of indie/folk/pop tracks in early 2021.

This epic lineup brings together an eclectic mix of five of NZ’s finest musical talent, each performing their only Taranaki show together over summer.

Tickets on sale from 12pm Tuesday July 14 from Ticketek. 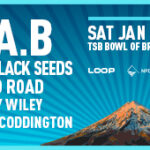